A pond in the sky 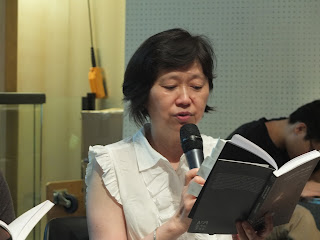 (Polly Ho) Agnes Lam spent her afternoon with us again in Kubrick. It was the second time she did a reading with us, and this time, she sparkled with her words as well as her white cotton dress.  To celebrate this third book, A pond in the sky, many of her friends including Xu Xi and Yvonne Loong came to give their support.  As a reader, I could not help asking her why it took her so long to publish a third poetry book. She responded by saying that, in the last few years, she became quite valuable to the university as an administrator; she was Acting Director of her Centre and was then promoted to Associate Dean of the Arts Faculty. It was a time when she became extremely occupied with administrative work. She admitted that she was not a prolific writer. By writing less, she was able to retain a certain purity and softness in her language. Chris Song, one of the translators of this book, confessed a degree of difficulty in translating Agnes’ gentle and feminine p
張貼留言
閱讀完整內容
更多文章