A hermit in a bustle and hustle city 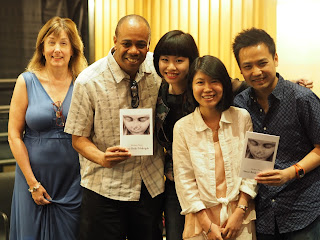 Nicolette Wong is our featured poet in June! It is her first time openly talks about her experience writing poetry, managing an online magazine, launched an independent publishing house, etc. She discussed what and how literature/film inspires her. Among which, she is very much influenced by Japanese films in the 60s and 70s. She has rich exposure to international writers through managing this online magazine (A-Minor Magazine). She improved her writing and aesthetic sense by reading many manuscript on a daily basis. Nicolette names herself as a hermit, but she is never a lonely one. She has so many intellectual friends in Hong Kong and outside of Hong Kong.
張貼者： Kubrick Poetry 於 6/29/2015 11:50:00 上午 沒有留言: 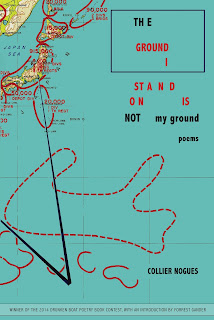 Collier Nogues’s first book of poems, On the Other Side, Blue, was published by Four Way Books in 2011. Her writing has been supported by the MacDowell Colony, the Ucross Foundation, Vermont Studio Center, and Fishtrap. She grew up in Texas and on Kadena Air Base in Okinawa, Japan, and now teaches creative writing at the Chinese University of Hong Kong. She also co-edits poetry for Juked.

The Ground I Stand On Is Not My Ground is a hybrid of poetry and digital art. The poems erase historical documents related to the development and aftermath of the Pacific War, especially on the island of Okinawa. Erased into poems, these texts become spare narratives of how individual soldiers’ and civilians’ daily lives were transformed by the war. The poems and their original texts tell a larger story about the ways we imagine war, and the ways language can be used to record, justify, memorialize, or resist it. The book has a companion website featuring each poem as an interactive erasure. (www.thegroundistandon.com)

“This is the best book of erasure poems since Srikanth Reddy’s Voyager. They don’t necessarily read as erasures, but as lyric poems— even managing rhyme and epistolary. Like Reddy’s Voyager, these carry powerful political implications, regarding Japan and Japanese/US relations before, during, and after WWII.”
--Forrest Gander
張貼者： Kubrick Poetry 於 6/29/2015 09:57:00 上午 沒有留言:

You can download Nicolette's selected poems from the following link:

Nicolette's poems (The link is closed)