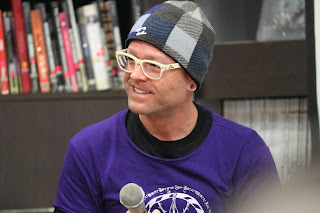 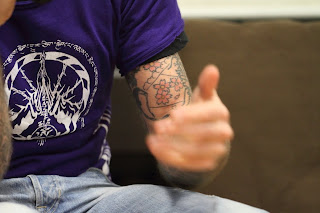 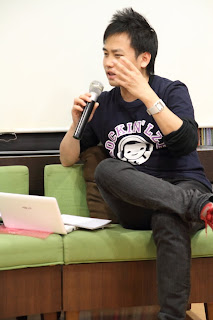 As a way of letting his poetry tell the story, our guest poet, Jason Polley, began right away, without any formal self introduction, by reading his poem “textbooks yelltell truth”, the first poem featured in his collection refrain. This first reading gave the audience a sense of Jason’s poetic style, stringing words and similar sounds to create a moving and continuous picture of India as though one is passing through the streets looking through the window of a moving vehicle. The audience responded to his reading by asking about his experience in India. Jason went on to read “distrust friendly gentleman,” a poem that tells of how he almost had his backpack stolen during his travels. The story triggered all kinds of curiosity from the audience, and this prompted Jason to speak a little bit about the spiritual insights he got from his journey. He described India as a place that takes him out of his comfort zone, and by having to be on your toes constantly, he was able to keep focus on the present. “If you are comfortable, you’re not in the present,” he said. When asked about why he left this writing project incomplete for so many years before picking it up again recently and having it published, Jason talked about the challenge of capturing and preserving that sense of innocence from his first visit to India, especially as he had made subsequent visits to the country. As well, Jason shared his insights on how to strike a balance between creative and academic writing. 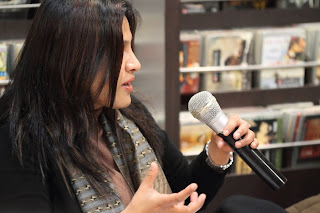 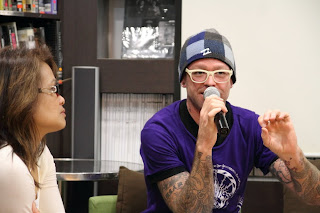 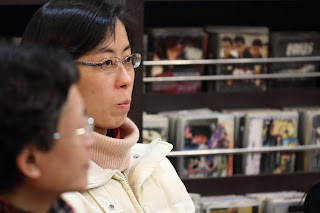 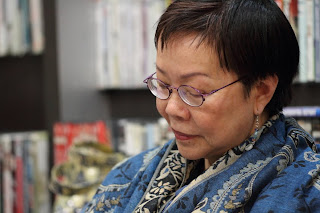 In the sharing session, Adam presented a collection of prose pieces inspired by the pictures taken from his visit to Kolkata last month. Milan shared a poem on the topic of marriage, Polly read a solemn poem about a funeral she attended recently, and Timothy shared a poem dedicated to Choi Yuen Village. Such is the variety of our poets.

The evening concluded with Jason copies of refrain. He also revealed that he has a book of fiction coming out in November. 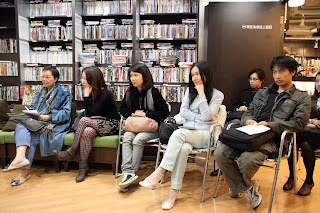