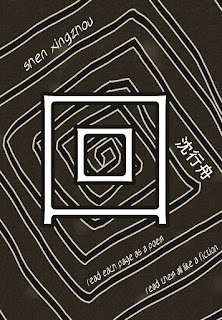 Shen Xingzhou (沈行舟), born in Hangzhou, studied English at Shanghai International Studies University, obtained her master’s degree in visual culture studies from The Chinese University of Hong Kong. She writes in both English and Chinese. Her poems have appeared in many literary magazines and newspaper supplements in Hong Kong. In 2015, her English drama Breathe Me was adapted into a physical theater, shown in public. In 2017, she published her first bilingual book of poems, Hui. Beside, her works of photography and handcrafts have been exhibited in many galleries in Hong Kong.

Hui is a book of poems written in Chinese and English. It may appear as a collection of poems, but it has the inner structure of a novel. Each poem is an independent story, mostly dark and dreamlike, but they relate to one another, weaving a larger story that echoes the theme Hui, 回, which means to circle. For her, the title refers her repetitive emotional return to the stories in the poems.
張貼者： Kubrick Poetry 於 9/30/2017 09:32:00 下午 沒有留言: