Kubrick Poetry •July • A Pond in the Sky

A Pond in the Sky is the latest poetry collection of Agnes Lam. This bilingual volume consists of poems selected from the first two collections as well as the manuscript for her third collection, which is mainly about connections — connections within our city, between our city and the rest of Asia or other places as well as between people and the universe. 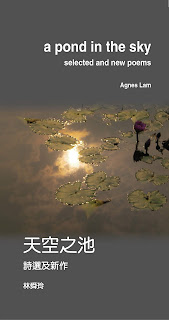 Born in Hong Kong, Agnes Lam later studied in Singapore and America. Upon graduation, she taught at the National University of Singapore before returning in 1990 to teach at the University of Hong Kong till she retired as Professor in 2012. She specializes in Asian poetry in English and language education in China. She is also internationally known as a poet and some of her works have been translated into German, Italian and other languages. Representative works include: Woman to woman and other poems (1997) and Water wood pure splendour (2001). In 2008, she was awarded the Nosside International Poetry Prize (Special Mention) and was made Honorary Fellow in Writing by the University of Iowa. In 2009, she received a Commendation Certificate from the Home Affairs Bureau, Hong Kong SAR Government, in recognition of her outstanding achievements in international arts and cultural activities.
張貼者： Kubrick Poetry 於 7/09/2013 10:08:00 下午